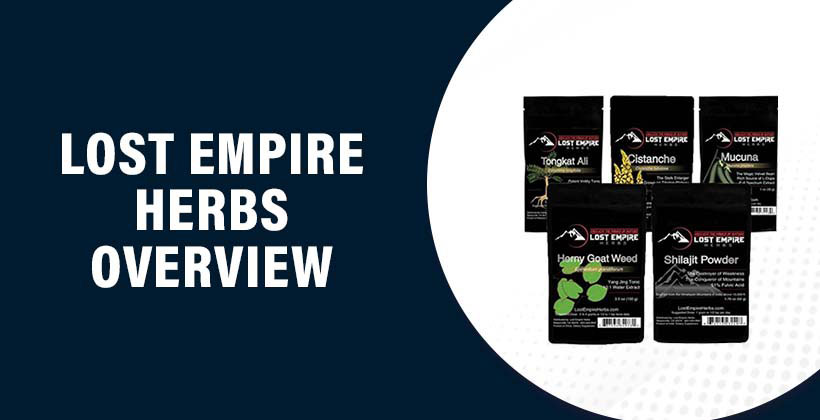 Lost Empire Herbs is a family owned and operated herb company created by three like-minded brothers who have a passion for living a healthy, athletic lifestyle.

Brain supplements come in different colors, formulations, and sizes, but unless you’re careful where you get them, you might end up getting more than you bargained for i.e. pesticides and fillers. The Lost Empire Herbs is one of the enterprises that have set themselves apart from the competition through quality-assurance.

And as their name “Lost Empire” suggests, their goal is to help bring people up to speed with supplements that have gotten lost over time as societies advance. But how exactly do they measure up to the sky-high expectations pegged on this niche? We investigate.

Based in Watsonville California, Lost Empire is a company that has fast grown to claim global repute. They previously used to trade under the name Super Man Herbs – that was back in 2012 to 2016. However, they were forced to change their trade name owing to copyright issues with DC Comics, the owner of the Superman brand.

Behind this brand are three awesome brothers – Logan Christopher, Cloud Christopher, and Zane Christopher. And so far the three brothers have kept this business as tight-knit as it can be, particularly running in line with family values.

Over time, the team behind the brand has grown steadily owing to the need to provide better service to an ever-growing clientele. They have directly employed at least 15 team members, 3 of those being dedicated full-time members of the customer support department.

Lost Empire Herbs is a dietary supplement brand that offers consumers different brain, sexual health, prostate health, and muscle-boosting supplements. The brand is known for incorporating the most reliable and all-natural ingredients that provide quick solutions to various health issues.

Lost Empire Herbs are herbal extracts claimed to be formulated using high-quality and potent ingredients from around the globe.These supplements promise to improve overall health by enhancing energy and endurance, physical performance, and mental clarity. Additionally, these herbs target both men and women as per the manufacturer claims.

Lost Empire Herbs exist in form of capsules, teas, tinctures, or extract powders. These herbs contain popular ingredients such as shilajit and Rhodiola.

How Does Lost Empire Herbs Work?

Lost Empire provides you with numerous products like the Thor Hammer Bedroom Performance Formula that may boosts testosterone levels to allow those struggling with erectile dysfunction to have a healthier sex life.

The brand also involves products like Athena Women’s Formula that helps women boost their vitality levels, Hercules pre-workout formula that allows you to have a fulfilling gym session, and the Spartan Broad Spectrum Adaptogenic Formula that enables you to fight fatigue and stress for a productive day.

Who Is The Manufacturer Of Lost Empire Herbs?

Lost Herbs Empire is an American-based dietary supplement brand manufactured by the Lost Empire firm based in Watsonville California. The company previously used to trade under Super Man Herbs.

However, due to DC comics’ copyright issues, the firm had to change its name, hence Lost Empire Herbs. It is a family-owned business, and so far, they produce over 20 dietary supplements to help their consumers improve their health and stick to their wellness goals.

What Are The Ingredients In Lost Empire Herbs?

While Lost Empire Herbs supplements do not highlight the number of ingredients used, the formulas feature some of the best and scientifically-proven herbs, minerals, and vitamins to help you achieve your health goals. Some of the natural elements involved in Lost Empire products include:

Studies in the International Journal of Alzheimer’s Disease found that shilajit improved cognitive disorders in humans. It also works as a stimulant.

A study in the Journal of the International Society of Sports Nutrition found that Tongkat Ali improves stress hormone profile and certain mood state parameters. This ingredient may support sleep deprivation, exercise training, and stress of dieting.

A placebo-controlled study in the Evidence Based Complimentary and Alternative Medicine evaluated the efficacy of Bacopa monnieri for memory in medical students for six weeks. Blood biochemistry showed a significant increase in serum calcium levels and the study concluded that Bacopa improved cognitive functions.

Thanks to its adaptogen characteristic, this herb has a normalizing physiologic influence as per the study. Due to the contradictory nature of the current evidence, more research is required to ascertain its effectiveness.

The Science Behind Lost Empire Herbs

Most of the ingredients used in the formulation of their products are also backed by scientific research thus, improving your overall health by helping you kick out any health issues, whether erectile dysfunction, imbalanced hormones, or diminishing energy.

In our research for this report, we found that consumers are frequently asking the following questions regarding the Lost Empire Herbs.

Looking at the ingredients featured in lost empire herbs products, you may tell that the supplements produced are safe for use. Additionally, the Lost Empire Herbs reviews do not have any safety warnings about the brand.

How Much Does Lost Empire Herbs Cost?

Lost Empire Herbs products are relatively low-priced, so you do not have to worry about them breaking your bank.

How Should You Take Lost Empire Herbs?

You should follow the supplement based on the instructions offered by lost empire. The supplements might not provide you with immediate results, but you will observe some regular use improvements.

Lost Empire offers consumers a money-back guarantee. Therefore, if any of their products do not appeal to you, you may ship back any unopened or opened packages and receive a full refund. The firm does not provide you with free trials.

How Does Lost Empire Herbs Compare To Other Weight Management Products?

Compared to other dietary supplement brands, lost empire offers you nothing but quality, unique product variety, impeccable packaging, and a one-year money-back guarantee.

What Are The Side Effects Of Lost Empire Herbs?

Even though the manufacturer and Lost Empire Herbs reviews do not reveal any side effects, you should visit a doctor if you are under-prescribed medication or have any allergies.

Is Lost Empire Herbs Worth It?

Yes, it supports a healthy lifestyle and allows you to achieve all your wellness goals. The brand also offers you all-natural ingredients on the market, so you do not have to worry about any adverse side effects.

What Are Consumers Saying About Lost Empire Herbs?

According to the Lost Empire Herbs reviews online, the all-natural formula is the best option for improving their overall health and attaining their annual wellness goals. Each product also comes with a blend of natural ingredients that are clinically-tested and backed by science.

With countless male enhancement supplements available on the market today it seems impossible to find “the right one.” Sexual performance declines naturally as men age, which may contribute to feelings of inadequacy or embarrassment. Male enhancement supplements should be based on four key factors: active ingredients, ability to support sexual stamina, enhance arousal, improved* sexual desire, and backed by clinical studies.

Below you’ll find some of the most effective male enhancement supplements on the market today, in our opinion.

Of all the brands we reviewed, only Virectin produced incredible results in less than 7 days! This powerful proven supplement boosted the libido, increased stamina, and maximized the size of the erection to 90% of the users who used Virectin as per the survey.† They experienced such a powerful rush of blood to the penis that it became harder, larger, and longer-lasting than ever before – even the older men who tested it said that they were performing better than they had when they were young!

The benefits of Virectin are felt within the first 7 days and continue to get stronger over time. 86% of Virectin users said that it completely transformed their sex lives, giving them more confidence in and out of the bedroom.† Their sex drive was through the roof, and with increased stamina, they were able to perform for hours with drastically less recovery time. 90% of users reported enhanced sexual pleasure and satisfaction for both partners!†

95% of users experienced an incredible increase in their testosterone levels within as little as 7 days.† Virectin offers a scientifically tested, potent formula of 16 key active ingredients which are all proven to support optimal sexual functioning, and many of them are rich in antioxidants that enhance overall health.

There is a no-hassle 60-day money-back guarantee on Virectin, which is proof that the manufacturer knows it will produce the impressive sexual performance results you want, and having studied it in detail for this review, we know it will too – a stronger sex drive, unlimited endurance, and of course, rock-hard erections on demand!

As a male enhancement supplement, Legendz XL seems to have some potential benefits for men wanting to improve their sexual performance and certainly includes ingredients often found in these types of products. However, there are also several concerns with the brand that should be noted, including the fact that because the key active ingredients are contained in a proprietary blend, the amounts of each aren’t disclosed, so it’s impossible to know just how potent the supplement actually is overall. Another drawback of this brand is that there is very little evidence backing the claims of the manufacturer, meaning consumers would really have to take their word that it produces results in the short time stated.

Although the male enhancement supplement Potenca is said to have multiple benefits that include supporting better levels of testosterone and increasing sexual stamina, very little official information seems to be available for potential customers. While the supplement is sold on some online retail sites, there is no actual website for the brand and the name and location of the manufacturer are not known either.

A bigger concern, however, is that although some of the independent customer reviews have been reasonably positive, there is absolutely no evidence to show that Potenca actually works, and there doesn’t appear to be any kind of free trial offered either as a way for men to assess it firsthand with no financial risk.

In an industry where it may be daunting trying to figure out fake supplements from the ideal products, lost empire herbs formulas offer you nothing but premium distinction. The brand also provides you with herbal extracts that naturally improve your overall health, increase endurance, and optimize mental performance. The brand also provides you with various products that you may choose from, making them useful.

*Result may vary. If you have a serious medical condition, or have a history of heart conditions we suggest consulting with a physician before using any supplement. The information contained in this website is provided for general informational purpose only. It is not intended to diagnose, treat, cure or prevent any disease and should not be relied upon as a medical advice. Always consult your doctor before using any supplements.

† Based on an internal customer response survey of subgroups of individuals. This is a subjective survey and in no way should it be intended to be interpreted as a clinical study. Results may vary.