Marine-D3 (by Marine Essentials) is promoted on the company’s website as a “super-pill” designed to “stop accelerated aging [in] its tracks” and “help lower and restore your blood pressure levels.” The website also claims that “By giving your cells what they need your body will experience energy.” However, no clinical studies have been published to back up these claims specifically for the Marine-D3 formula.

What Is Marine-D3 and does it live up to anti-aging claims? 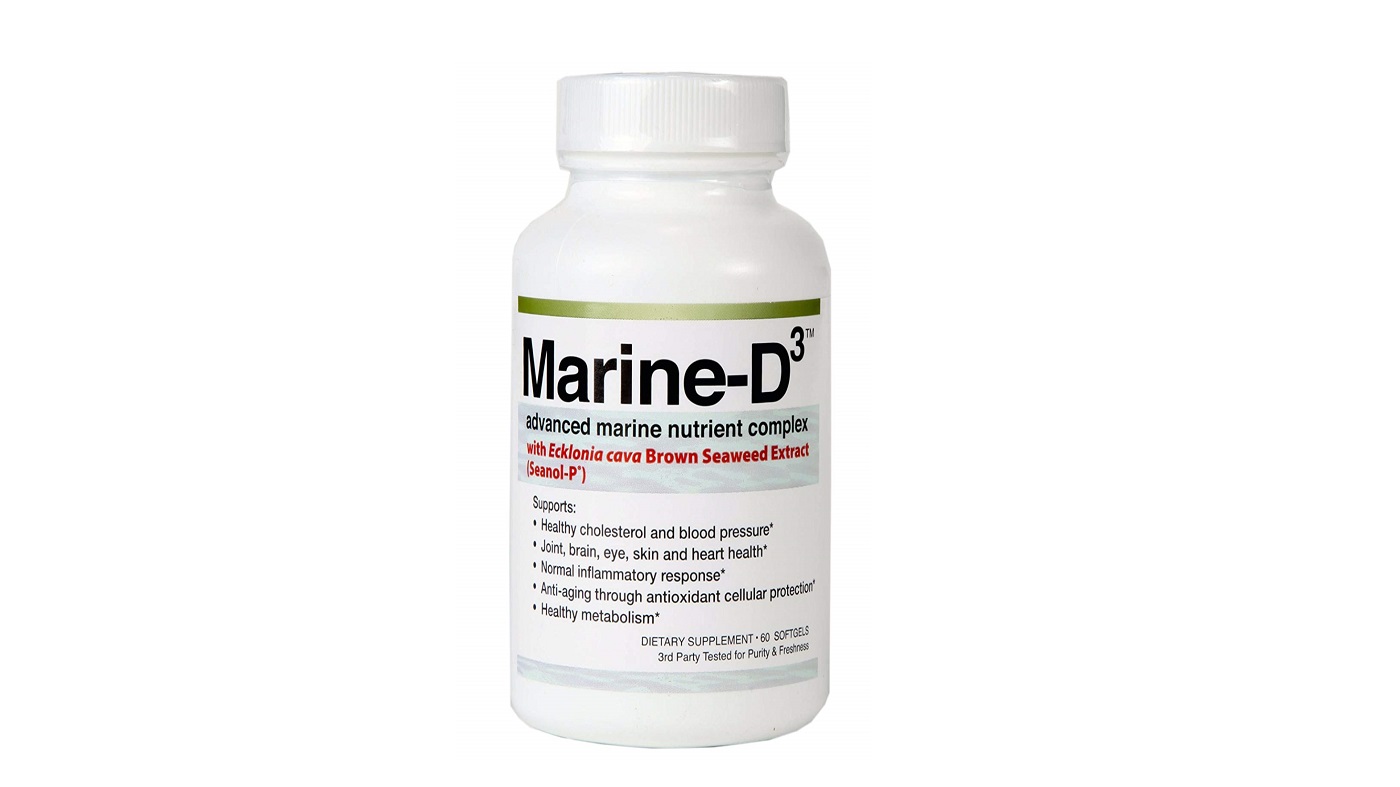 Marine-D3 (by Marine Essentials) is promoted on the company’s website as a “super-pill” designed to “stop accelerated aging [in] its tracks” and “help lower and restore your blood pressure levels.” The website also claims that “By giving your cells what they need your body will experience energy.” However, no clinical studies have been published to back up these claims specifically for the Marine-D3 formula.

ConsumerLab.com has not tested this product to determine the amounts and quality of the claimed ingredients. Assuming it delivers what it claims, however, a daily dose of two capsules would provide 1,000 IU of vitamin D3, which is more than most people need (the recommended daily intake is 800 IU for adults ages 70 and older, but 600 IU for younger adults). Doubling the dosage, as suggested as an option in the directions for use, would provide 2,000 IU, which could be appropriate for someone slightly deficient in vitamin D and could, for such a person, have a variety of benefits. (See How Much Do You Need and How Much Is Too Much? in the Vitamin D Supplements Review for more about choosing the right dose of vitamin D).

The 300 mg of EPA and DHA from calamari oil claimed in two capsules of Marine-D3 is in line with suggested average daily intakes of these omega-3 fatty acids from US Dietary Guidelines and the American Heart Association to reduce cardiovascular risks. However, this benefit is only associated with intake of these omega-3s directly from consuming fish; studies have not found fish oil supplements to reduce the risk of cardiovascular death. Fish oil supplementation may have other benefits, such as improving age-related cognitive decline, anxiety, and depression, but typically at higher doses than provided in Marine-D3 (see the What It Does section of the Fish Oil and Omega-3 Fatty Acids Supplements Review for more information).

The third ingredient in Marine-D3 is an extract of brown seaweed (a type of algae known as Ecklonia cava) called Seanol-P. Many of Marine-D3’s claims appear to relate to this ingredient. The extract has anti-oxidant effects and, according to its manufacturer, BotaMedi, has been authorized by the FDA for use as a dietary ingredient. A 12-week double-blind, randomized clinical trial among 97 overweight men and women in Korea showed that a daily dose of 144 mg of this extract led to significant improvements in body weight, BMI, body fat ratio, and waist circumference compared to placebo — although this comparative benefit was not found for those receiving a lower dose of 72 mg. However, both low- and high-dose groups showed significant reductions in total cholesterol and LDL cholesterol and increases in HDL (“good”) cholesterol compared to people receiving placebo, with total cholesterol falling by 14.6 and 18.8 mg/dL in the low- and high-dose groups, respectively (Shin, Phytother Res 2012). The amount of Seanol-P in two capsules of Marine-D3 (40 mg) is about half the lower dose used in this study, suggesting that Marine-D3 may not reduce body fat but, if a double dosage is taken (four softgels) it may improve cholesterol levels.

Despite the fact that laboratory and animal studies suggest Ecklonia cava may have a blood-pressure lowering effect (Hong, Korean J Pharmacogn 2006; Wijesinghe, Nutr Res Pract 2011), in the study above, there was no significant decrease in blood pressure compared to placebo. There do not appear to be any studies on the effects of Seanol-P in people diagnosed with hypertension.

As for Marine-D’s claim that it increases energy, one randomized, placebo-controlled study found that young men drinking a Ecklonia cava preparation before high intensity exercise had an increased time-to-exhaustion — an extra 2 minutes (Oh, Int J Sport Nutr Exerc Metab 2010). This may suggest a benefit for exercise endurance, but more studies are needed.

From a cost perspective, you can get the vitamin D3 and omega-3 fatty acids in Marine-D3 from individual supplements at much lower cost than the $1.67 per day cost of Marine-D3. Choosing the best priced, quality-Approved supplements tested by ConsumerLab.com, you can get 1,000 to 2,000 IU of vitamin D3 for as little as 2 cents from liquid drops or softgels, and you can get 300 mg of EPA and DHA from calamari oil for 30 cents (or from fish oil for just 3 cents). The bulk of what you are paying for in Marine-D3 is Seanol-P. Seanol is available in several other marketed supplements, although these products use what is called Seanol-F, which is apparently a less concentrated ingredient than Seanol-P. The Seanol-F products are generally targeted at the treatment of fibromyalgia. Nutricology Fibroboost® for example, provides 400 mg of Seanol-F per capsule (a total of 1,200 mg per the recommended 3-capsule serving) with each capsule costing around 70 cents ($2.10 per daily serving).

The bottom line: Marine-D3 appears to be a clinically untested formulation and there is no evidence that it is effective as an “anti-aging” product. Its individual ingredients may offer selected benefits to specific individuals but buying this product means paying a large premium to get vitamin D, omega-3 fatty acids, and a relatively new ingredient for which there is only preliminary and limited evidence of potential benefit.

Below you’ll find some of the most effective joint pain supplements on the market today, in our opinion.

No severe adverse reaction has been reported from Marine-D3 use. However, users should note that the product contains a high amount of D3 and, as such, may cause unpleasant reactions like chest pain, bone pain, and even unnecessary weight loss in some. It may also not be suitable for nursing or pregnant women and those younger than 18.

For a product in its quality range (well-studied and proven ingredients), Marine-D3 seems reasonably-priced. However, as with most products, the exact cost may vary from one retailer to another.

The brand’s recommended dosage is two capsules daily with meals and water.

There are no free trials offered. However, buyers are provided with a day return window for a full refund if unsatisfied with their purchase.

Marine-D3 combines ingredients with specific qualities in one product. Used as directed, these ingredients may approach several health conditions simultaneously for improved overall wellbeing. This is not something we see every time in supplements, and it is a key feature that helps Marine-D3 stand out.

It seems so. Marine-D3 contains studied and proven ingredients, and for a product in its quality range, it sells at an affordable rate. The brand is also well-known, and the ingredients are few and active.

Marine-D3 claims to improve the health of virtually every part of your body. The ingredients in Marine-D3 claim to provide anti-aging support for your heart, eyes, and joints, for example, while also lowering your blood pressure.

Other key ingredients include Seanol, which is a seaweed extract that comes from a marine plant organism named Ecklonia Cava.

Other advertised ingredients include beeswax and lecithin.

Vitamin D is one of the key ingredients in Marine-D3 (as you probably guessed from the name). 1,000 IU may sound like a big dosage, but it’s relatively small compared to other vitamin D supplements.

For example, the Mayo Clinic reports that in some studies on cognition, participants safely took up to 9,000 IU of Vitamin D3 by mouth daily for up to 40 weeks.

More importantly, high cholesterol level studies have involved doses of up to 3,332 IU, while high blood pressure studies have studied doses up to 8,571 IU.

At the same time, you have organizations like the Vitamin D Council (which admittedly doesn’t sound like an unbiased organization) arguing that the daily recommended value of vitamin D should be 5,000 IU instead of 400IU.

Marine-D3 also seems to have relatively low doses for EPA and DHA guidelines. Different organizations have different opinions on the best amount of EPA/DHA for adults to take per day.

The American Heart Association, for example, recommends that you take 1000mg of omega-3 EPA/DHA per day, while patients with high triglyceride levels should take 2000 to 4000mg of EPA/DHA per day. Other recommendations – like the one from the European Food Safety Authority in 2010 – put the amount as low as 250mg per day.

In general, 500mg per day of EPA/DHA seems to be the one recommended by most doctors – especially if you’re not at a high risk for coronary disease or a heart attack.

Even at that relatively low estimate, Marine-D3 only contains 300mg of EPA/DHA in each daily dose. If you want to significantly improve your cardiovascular health, then it may be difficult to do so with the low doses in Marine-D3.

Here’s what the ingredients label for Marine D3 looks like: 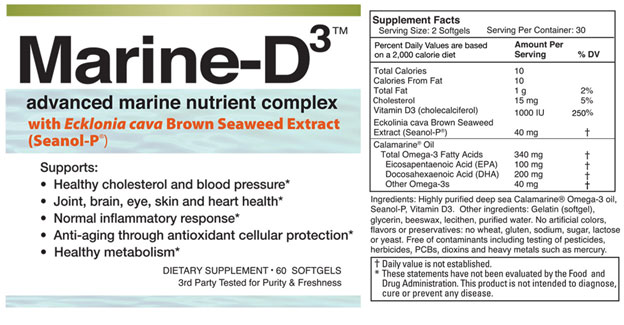 Marine-D3 is considered expensive for a vitamin D or omega 3 fatty acid supplement (you could easily buy one of each type of supplement separately for less than half the price of what you’re paying with Marine D3). Here’s how pricing breaks down for this supplement:

Free shipping is available on all orders over $99 within the United States.

All purchases come with a 100% satisfaction guarantee. You get your money back if you’re unsatisfied with your purchase for any reason.

Marine-D3 is also available on Amazon.com for around the same price ($65 on Amazon compared to $67 on the official site). That Amazon purchase comes with free shipping.

The company is based in Chicago at the following address:

You can contact the company by calling (877) 699-2831 or by emailing them through this online form: MarineEssentials.com/contact-us/

According to the Better Business Bureau, the company employs 60 people and also operates under the name EOK Marketing, LLC. The company was incorporated on November 25, 2010.

Marine Essentials has actually faced some criticism from the BBB over claims made about Marine-D3. Here’s what the BBB page has to say about the dispute:

“On March 17, 2015, this business ran an ad in the Evansville Courier for its product “Marine D-3” and made numerous health claims about the product.”

These health claims were found to be in violation of the BBB’s Code of Advertising standards, which basically forbid you from making false claims about the health benefits of supplements.

Marine Essentials eventually pulled the advertisement, although the BBB still closed the case with a “failed to comply” warning because the company never provided a substantiation of the health claims.

Ultimately, Marine-D3 is a vitamin D supplement that makes bold claims about its health benefits without providing any major scientific evidence to reinforce these claims. Furthermore, it contains relatively low dosages that are unlikely to have a major impact on your health – especially if you’re taking the supplement to improve your cardiovascular health. At its high price tag, it simply doesn’t provide enough value to look like it’s worth it.