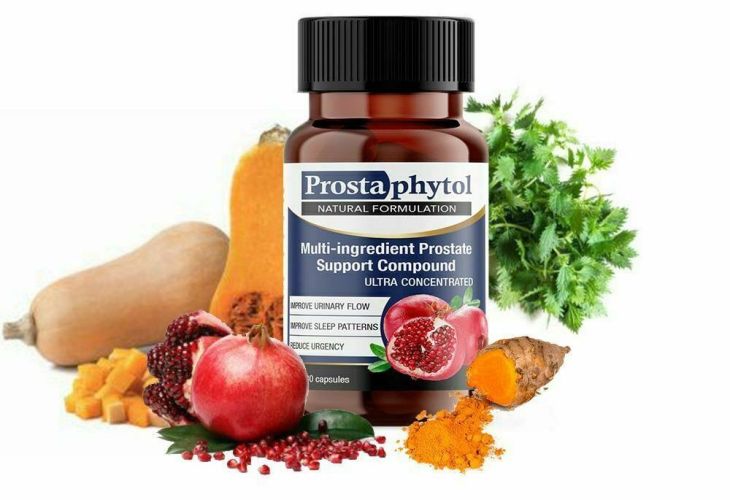 Prostaphytol is a dietary supplement in the form of capsules that may improve prostate health for men.

A lot of men deal with inflammation of the prostate, which in turn, has a lot of health and lifestyle consequences. First of all, prostate inflammation and swelling might be indicative of a much more severe health condition. Secondly, it may affect erectile dysfunction negatively. It could also cause the individual to feel like they have to go to the bathroom constantly to relieve their bladder.

The product we are going to be highlighting today is called Prostaphytol and it is intended to alleviate the symptoms of swollen prostate and stop the inflammation that causes it all together. Therefore, it is a prostate health supplement that should only be used by men.

The consumer should also note that there are no Prostaphytol Reviews that have been written by confirmed users.

We have already touched on the primary function of this product. Prostaphytol is supposed to stop prostate inflammation at the source so that it doesn’t get swollen in the first place. If Prostaphytol may indeed decrease or eliminate prostate inflammation, it stands to reason that it will also decline the amount of nighttime trips to the bathroom that the user will need to make.

Prostaphytol may also make it possible for users to empty their bladders when they use the bathroom. Perhaps, in rarer cases, Prostaphytol will even increase erectile function. However, the most important thing is that Prostaphytol is supposed to work naturally. All of the active ingredients in the formula come from natural sources.

While many of the active ingredients in Prostaphytol have been studied for their effects and possible benefit to prostate health, the research appears incomplete. For example, pomegranate juice seems to have a benefit for prostate function on the surface. However, most of the tests that have been conducted on it lacked a placebo control group.

The addition of saw palmetto is also a bit concerning. While initial tests showed promise, subsequent tests suggest that saw palmetto is no more helpful than a placebo at treating prostate swelling.

Pros and Cons Of Prostaphytol

What Are The Ingredients In Prostaphytol?

As we mentioned earlier, Prostaphytol is made up of a list of natural ingredients. The main function of most of these ingredients seems to be to stop prostate inflammation. Take a look at what’s in Prostaphytol:

Who Is The Manufacturer Of Prostaphytol?

Prostaphytol may be a subsidiary of another company called Wellform Limited. However, this could not be confirmed at the time of this writing. In any case, Prostaphytol makes other supplement products, including ones to increase male virility.

In our research for this report, we found that consumers are frequently asking the following questions online in regard to Prostaphytol.

There have been no official complaints about the safety of this product.

How Much Does Prostaphytol Cost?

When compared to other prostate health supplements, Prostaphytol has a similar price.

How Should You Take Prostaphytol?

The instructions for Prostaphytol state that you only need to take one capsule per day.

Does Prostaphytol Provide A Free Trial Or Refund Policy?

There is a money-back guarantee, but no free trial offered on the product.

How Does Prostaphytol Compare To Other Prostate Supplement?

The formula is similar to other prostate health supplements on the market.

What Are The Side Effects Of Prostaphytol?

Due to the presence of turmeric in the formula, Prostaphytol may cause skin irritation such as rashes or hives.

We would strongly recommend talking to a doctor or urologist before you decide to buy Prostaphytol. They will best be able to help you review the ingredients and decide whether they may have any benefit for you.

What Are Consumers Saying About Prostaphytol?

While there are reviews for the product on the official Prostaphytol website, it’s important to note that these kinds of reviews may be biased or illegitimate.

Maximum strength Prostara is the most effective formula on the market for quickly reducing all symptoms associated with having an enlarged prostate.

Prostara has a high consumer satisfaction rating of 99%, which is no surprise when you consider how well it works to safely alleviate swelling in the prostate and decrease distressing urination urgency. This all-natural supplement helps individuals empty their bladder fully and eliminates embarrassing and inconvenient issues such as frequent nighttime urination, leaks, and dribbles.

In less than 4 weeks, testers reported that not only had their symptoms drastically decreased, but they were sleeping much better at night, experiencing improved sexual function, and enjoying more self-confidence.

ProstaPlex is a formula that can aid supporting health testosterone levels. Compared to other similar products, this may prove to be a good choice because of the benefits it describes, as well as its convenient suppository form.* However, individual needs and preferences should be considered, and choosing which supplement is right for a consumer is best achieved by consulting a trusted healthcare provider about the available options.

This product seems to be a good quality, highly effective supplement made by a company that has been in business for over 20 years. Although there are no results from clinical trials shown, there are a number of reviews from men who have used the product. The fact that it is sold at a very affordable price is obviously a bonus as is the full one-year refund policy.

Prostaphytol is a prostate health supplement that may decrease prostate inflammation and relieve some symptoms of BPH. As such, it is possible that taking Prostaphytol will result in less frequent bathroom visits, especially in the nighttime. The formula for this product is also all-natural.

The consumer should also be aware that some of the recent testing done on saw palmetto extract suggests that it is about as efficient as a placebo for limiting prostate swelling. There are also no Prostaphytol Reviews that have been written by confirmed customers.

Furthermore, you might experience mild side effects like rashes or hives, and the manufacturer does not mention a free trial. So, always remember to explore more about Prostaphytol, and be sure to consult your physician before use.

*Result may vary. If you have a serious medical condition, or have a history of heart conditions we suggest consulting with a physician before using any supplement. The information contained in this website is provided for general informational purpose only. It is not intended to diagnose, treat, cure or prevent any disease and should not be relied upon as a medical advice. Always consult your doctor before using any supplements.

† Based on an internal customer response survey of subgroups of individuals. This is a subjective survey and in no way should it be intended to be interpreted as a clinical study. Results may vary.